Back in July, we learned about the Dodge Charger Going electric.  Since then, we’ve heard the same fate awaits the Camaro in 2024 and the Mustang will lose its pistons around the same time.

The announcement about the Charger and of course, the Challenger going electric really set some people off. Muscle car enthusiasts continue to seethe over these announcements.

Dodge is a brand well known for producing ten-second tire-fryers, with the Challenger and the Charger leading. Now you’re going to have to charge your Charger before you charge off to the drag strip.

As V8s and internal combustion start to fade away into memory, the cars that will replace our ground-pounding muscle cars will include in 2024, the Dodge Challenger SRT Super Stock, which will mark the launch of the first all-electric Dodge muscle car.

Details were scarce during the original announcement, but the electric muscle car will likely be sold under a new eMuscle sub-brand. But what does this mean for the future of the Dodge Charger and Challenger? During a conference call, Stellantis CEO Carlos Tavares was asked if the Dodge Viper has a future as an EV.

The teaser video gave us a sneak peek at the design cues that will distinguish the electric muscle car from its combustion counterparts, including an illuminated logo resembling the Fratzog design used in the 1960s and 1970s. Underpinning the electric muscle car will be one of four new electric Stellantis platforms that offer ranges between 300 and 500 miles.

The instant power and torque of electric motors will also offer even crazier levels of performance than the combustion-powered Challenger and Charger. That’s no small feat considering the Challenger SRT Hellcat already has 807 hp to play with.

Interestingly, the teaser showed us that the car’s basic shape remains almost unmolested. Dodge has followed Porsche’s lead by doing very little in changing the shape or profile of the car. While some may complain that it’s lacking in originality or innovation, others will say that it’s true to its roots, it honors its heritage and it is a timeless classic.

With The Dodge Charger Going Electric, What Happens to the Viper?

Good question. No one from Corporate has said one way or another. Is there room for another $150,000+  sports car in the market? In 2008, they said that the next Viper would be all-electric.

“The definition of sports car is changing,” our source says. “People are looking at things differently now. The Viper was a throwback to the golden era of sports cars. It was all about big horsepower and small chassis. It’s time for that to change.”

The as-yet-unnamed Dodge EV is based on the Lotus Europa that rolls into European showrooms next month. In fact, the car Chrysler unveiled looked like a re-badged Europa with racing stripes. Specs call for a 200 kilowatt (268 horsepower) electric motor producing 480 pound-feet of torque — just 80 less than the Viper’s 8.4-liter V10. The goal is 0 to 60 in less than 5 seconds and a top speed above 120 mph. “We’re still going to offer products that are visceral,” our source tells us.

Although those figures fall well short of the Viper — which hits 60 mph in 3.9 seconds and tops out at 202 mph in base-model trim — they put the car in Tesla’s neighborhood, and possibly for much less than the $100K the Roadster goes for. “It’ll out-Tesla the Tesla,” says Aaron Bragman, an industry analyst with Global Insight, who predicts we’ll see the Dodge EV by the end of 2010. “It’s a new halo performance vehicle for Chrysler.” And it even looks good in Viper green, as our Photoshopped version of Chrysler’s pic shows.

Of course, Chrysler’s still gotta build it. Anyone can produce one EV; it’s making a lot of them that’s tricky, and Chrysler’s future is anything but assured. Some industry watchers were privately speculating that it could be chopped up and sold off as early as next year. After all, the company’s selling just three cars per month per dealership and it’s reportedly lost $400 million this year. “With those kinds of numbers, what can they do to hold on until 2010?,” Bragman asks. 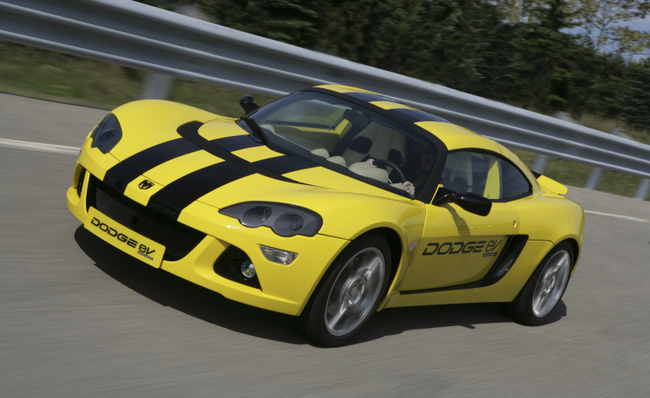 Of course, this has not happened and the world awaits any updates on the successor to the Viper, if one is coming at all.