Sporting 480hp, the 2024 Mustang GT will be the most powerful Mustang GT ever.

Ford debuted what may be the last of the V8-powered muscle cars out of Detroit. The redesigned, seventh-generation Mustang has bold new styling, with dramatic bodywork accented with familiar cues, outfitted with more advanced technology and increased power. Unlike most other vehicles revealed at the North American International Auto Show this week in the Motor City, there were no hybrid, plug-in hybrid, or electric versions announced.

It’s fitting that the pony car that started a performance revolution back in 1964 could be the last V8 to ride into the sunset as the auto industry turns its efforts toward electric models. Stellantis has shown its electric Dodge Charger Daytona SRT concept. GM’s plans for the Chevrolet Camaro haven’t been revealed.

The Mustang has long been a special breed, mixing brutish performance, style, and nostalgia. The current car saw a significant improvement in handling, ride, power, sophistication, and technology over the fifth-gen ’Stang. This new car builds on that, and frankly, it starts from a much stronger position than the current generation.

Ford is sticking to its proven formula, with the redesign focused on freshening the appearance, boosting the convenience technology, and edging up horsepower.

That the engines largely carryover is a good thing. The strong base turbo-four powertrain along with thrilling GT V8 muscle suit the car well. (Those who are wondering about a plug-in hybrid version should consider the fully electric Mustang Mach-E.) All the prerequisites to satisfy ardent fans and prospective owners eager to snag a classic, gasoline-fueled V8 before it’s too late seem to be fulfilled.

What’s most needed with the redesign is improved reliability. The current car performs well in our tests, with some obvious caveats, such as a tight rear seat. And owners love it, based on our member surveys. But they also tell us that reliability has been inconsistent and far below average in recent years.

Ultimately, this Mustang is destined to be a future collectible, one of the last old-school muscle cars. For that reason alone, we look forward to buying one and taking this potent pony car for a ride.

The exterior borrows from the current muscle cars, with a Mustang angular grille and sloped roofline. The hood seems to draw from the Camaro coupe and perhaps even the Dodge Charger sedan. The rear fenders flare out, with a sharp crease to the top, akin to the Camaro’s aft flanks. Designers often put more visual weight on the fenders of sports cars to emphasize the rear-drive configuration. From a practical standpoint, it adds more wheel-well space to accommodate wide tires on the higher-end trims.

The rear looks distinctly Mustang, with a clear connection to the current and even previous generation model, particularly with the three-zone taillamps. Historically, these light elements have pulsed one at a time, animating the turn signals.

Viewed from the side, the lower body resembles that of the Mustang Mach-E electric vehicle.

The cabin has been given an evolutionary makeover. It moves away from the circular theme with the current car to using more rectangular shapes. Even the steering wheel now has a flat bottom.

The gauge cluster is meant to evoke memories of the angular, Fox-body Mustangs from the 1980s to early 1990s. It has numerous customization options, allowing the driver to dial up the information they favor. 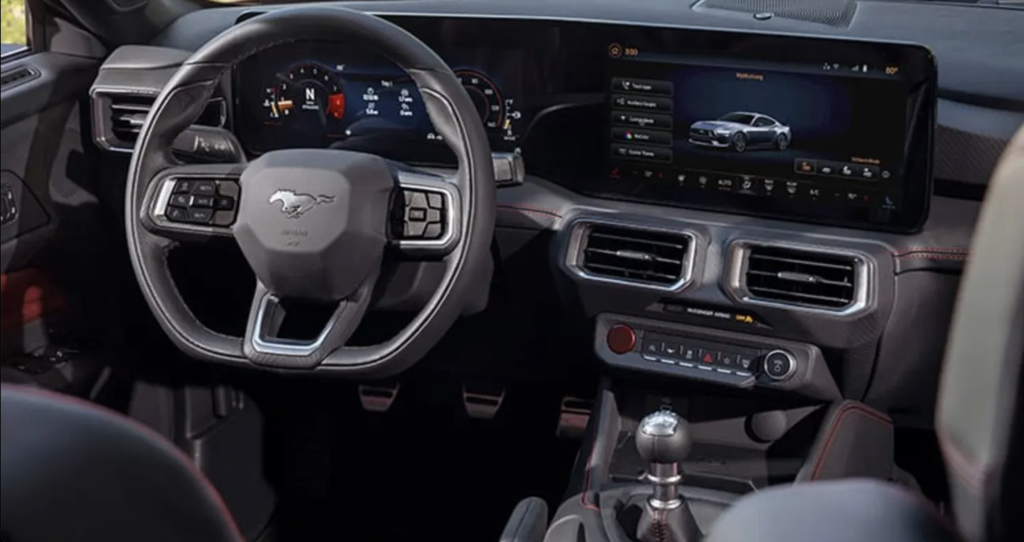 An available large glass panel spans from the 12.4-inch digital instrument panel across to the adjacent 13.2-inch infotainment screen. That center screen is larger and positioned higher in the dash than before. This moves the vents to below the screen. Upon start-up, the two screens have a welcome animation that adds some sci-fi flash.

The dash itself is more of a flat shelf than before. The current car has a double binnacle design that’s a nod to the original Mustangs, with an elevated lip on the driver’s and passenger’s side. At least the manual shifter has a classic ball-like knob.

There are two engines, each carried forward from the sixth-generation car.

The base powerplant is again a 2.3-liter turbocharged four-cylinder engine. Power outputs haven’t been released yet. The current car produces 310 horsepower and up to 330 horsepower with an available high-performance package. Those numbers give a good indication of where the new car’s power will be.

The 5.0-liter Coyote V8 continues, with modifications that increase output from 460 horsepower to more than 480 horsepower—enough to make this the most powerful Mustang GT ever. (It’s notable that even with the road, rumble, and thrust that make accelerating in a Mustang so rewarding, 0-to-60 mph sprints will likely be in the mid-4-second range—quick for a gas car, but not as quick as many EVs.)

The transmission choices are a six-speed manual or a 10-speed automatic.

An available Performance Pack adds a front strut-tower brace to bolster chassis rigidity, a limited-slip differential to aid traction, wider rear wheels/tires, larger Brembo brakes, and a new electronic drift brake to aid racers who like to slide the tail out—an activity that requires a safe location and a truckload of tires to spare, preferably away from cameras at local Cars & Coffee events. An active suspension system can also be added to this package.

The GT Performance Pack piles on brake ducts to help with cooling and an engine oil cooler. An active exhaust system is optional.

Drivers can select from six modes to tailor the car’s performance to their needs, affecting steering effort, engine response, and stability control. The modes are Normal, Sport, Slippery, Drag, Track, and a customizable one.

Among other things, Mustangs are about showing off. This new car adds a remote feature that allows the engine to be revved from outside the car via the key fob.

Then there’s the Dark Horse, an all-new performance series for the Mustang line that targets dedicated enthusiasts. It has a distinct grille, aerodynamics, and badging. Its Coyote V8 will produce about 500 hp. It uses a heavier-duty, six-speed manual transmission developed from the latest Mustang GT 350, a track-focused version inspired by Carroll Shelby. The 10-speed automatic is also available.

Models with active suspension gain a pothole mitigation feature, where the car is able to minimize how much a tire drops when passing over a pothole. This not only smooths the ride but may also save the tires and wheels from expensive damage.

Overall, it’s the best version yet.